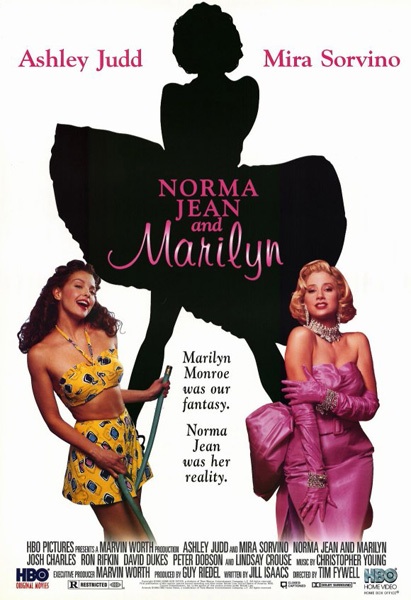 Normally I find it hard to be harsh in my reviews of films. I try to find redeeming qualities even in movies I hate. But this morning I had the misfortune of watching Norma Jean & Marilyn. This movie is the most atrocious thing I have seen in my whole life. All across the board horrid.

I’m not a huge Marilyn fan, but I enjoy some of her films and I happen to have read Norman Mailer’s biography (of sorts) on her. So I know her story. This movie completely distorts her life story and the plot is all muddled and confusing.

Marilyn is schizophrenic (pretty sure she wasn’t in real life), constantly arguing with her ‘Norma Jean’ self. The dialogue is blunt and unimaginative and filled with garbage. It’s hard to decide who is worse, Mira Sorvino (who I loved in Mighty Aphrodite) as Marilyn or Ashley Judd as Norma Jean.
Simply put, just don’t watch this horrible movie.
For the curious here are a few horrifying clips:

(Don’t even get me started on that terrible JFK)

Even though I haven’t been blogging lately that doesn’t mean that I haven’t been watching anything. I saw Sicario, The Martian, and finally started watching Game of Thrones. But nothing has really intrigued me enough to write about it. Until last night when I saw Legend, a film about London’s infamous Kray twins.

Legend itself isn’t a very good a film. It’s okay. The main problem is that it can’t decide what it wants to be. A gangster film or a romance? It really fails at the romantic elements, but the gangster bits are good. I think that if they had cut out almost everything to do with Frances (Emily Browning) the movie would have been a lot better (and shorter, it’s a tad too long). I had no sympathy for Frances and just found her annoying. Oh, woe is me, I married a gangster and he does gangster stuff and leaves me alone at night. Didn’t see that coming! Everything about Frances has been done before and it was just plain boring. I understand that the writer wanted to create this struggle between Frances and Ronald over Reggie, but it just doesn’t work.

But the Kray twins, Ron and Reggie (both played by Tom Hardy) are quite a bit of fun. In this film, Tom Hardy proves yet again that he is one of the best actors of his generation. I had some doubts back when I watched the trailer in May. I thought maybe Tom was overacting, especially as Ronald. But it turns out that I was very wrong. Tom is able to create these two very distinct and different characters. They are both fully formed and interesting. Reggie is suave, smooth, the brains of the operation. Ronald is chaotic, awkward, and all over the place. They are both oddly charming in their own ways. The thing that amazed me the most was I completely forgot that it was Tom Hardy playing both parts, I was just so absorbed in these characters. There is only one moment where Tom sort of wavered for me as Ron since I felt like his voice was going into Bane territory. But other than that he is superb as Ron, I loved all the little mannerisms. And Tom was also surprisingly funny in both roles.
Legend gets 7/10, but Tom Hardy gets 10/10.