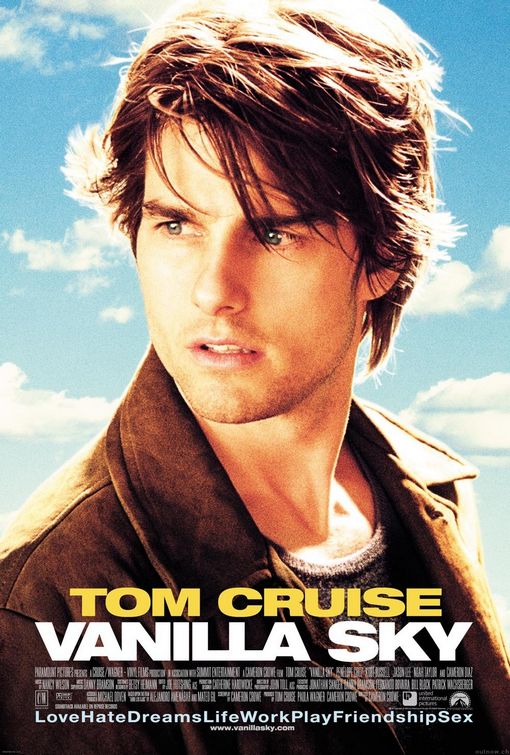 “I’ll see you in another life when we are both cats.”
I was watching this silly show, Celebrity Style Story, the other day and the focus of the episode was Tom Cruise. The commentators are pretty shallow on these kinds of shows, but when one of them said that Vanilla Sky seriously sucked I was extremely shocked and angry. What an asshole!! How dare he say such a thing?! Vanilla Sky is amazing! Then I went and googled the ratings for Vanilla Sky and found I was in the minority. On IMDB the film has a rating of 6.9 and on Rotten Tomatoes a measly 41%.
So what gives? I was first recommended this movie by a cab driver one day. The driver gave a somewhat spoilery synopsis of the film and it sounded extremely convoluted, but hey, I love Tom Cruise so when I saw the DVD cheap at a pawn shop I grabbed it.

And I love the movie, a lot. It is based on a Spanish film, Abre Los Ojos. Cameron Crowe directs and adapted the screenplay for the English version. Tom Cruise plays David Aames, a young, vain, rich man that seems to have it all. That is until one of his lovers turns his whole world upside down.
There is something about this film that appeals to me on a deeply emotional level. It is hard to pin point why exactly. Part of it is that I relate to David quite a bit. I’m not rich like him, nor am I as confident. But I can relate to the hubris of youth somewhat. David feels invincible, nothing can touch him. Early on in the film he and his friend, Brian, nearly get hit by a truck. But they make a narrow escape. David laughs with glee, as he never really felt all that threatened to begin with. He’s young, good looking he has his whole life ahead of him.

But David is brought down by his own ego and whimsical attitude. Yes, it is the accident caused by his lover, Julie (Cameron Diaz) that in a lot of ways ruins his life. But this act is only a symptom of David’s own selfish actions. He treated Julie carelessly and didn’t care about the effect his frivolous actions had on her. But the accident is also a result of his sense of immortality, of never having anything go wrong. David falls in love with Sofia (Penelope Cruz) at first sight. He vows to change his ways and be a better person in order to be worthy of her love. But then Julie shows up, offering herself to him. Even though David is in love with Sofia he feels he can have his cake and eat it too. Why not have one last romp with Julie? Sofia will never know. Well it is that selfishness and ignorance that changes David’s whole life.

I find this film to be quite deep and it is able to convey a very strong message without being too preachy. It is an emotional film brought to life by some incredible acting, particularly Tom and Penelope. No wonder they started dating after filming this, the chemistry between them is great. Their scenes together are very touching and intense.
The film looks great, I love the use of bright colors. I also enjoy the foreshadowing that happens early on as well as some of the visual metaphors. I really like the structure of the film as well, which I think is probably what turns other people off the most. Vanilla Sky is sort of a dream within a dream kind of film which can feel like a cheap twist in a lot of films. But I think it really works here and simply strengthens the message of the film, it isn’t done to get a cheap shock out of the audience. I also really enjoy the pop culture references, particularly near the end of the film. The soundtrack is also phenomenal, anything that uses Bob Dylan gets an A+ in my book.

Simply put, I love Vanilla Sky because of the emotional impact it has on me every time I watch it. I’ve never felt so emotional about a film, nor have I been able to relate to one the way I do Vanilla Sky. It stays with you for a long time after watching it and it really makes you question how you behave in your own relationships. Vanilla Sky is also very creative and there is no other movie like it. I think it is extremely underrated and it is some of Cameron Crowe’s and Tom Cruise’s best work. Maybe I’m crazy, but I give Vanilla Sky 9.5/10

Please feel free to give your opinion of Vanilla Sky, whether you love it or hate it. I would love to hear your take on it. 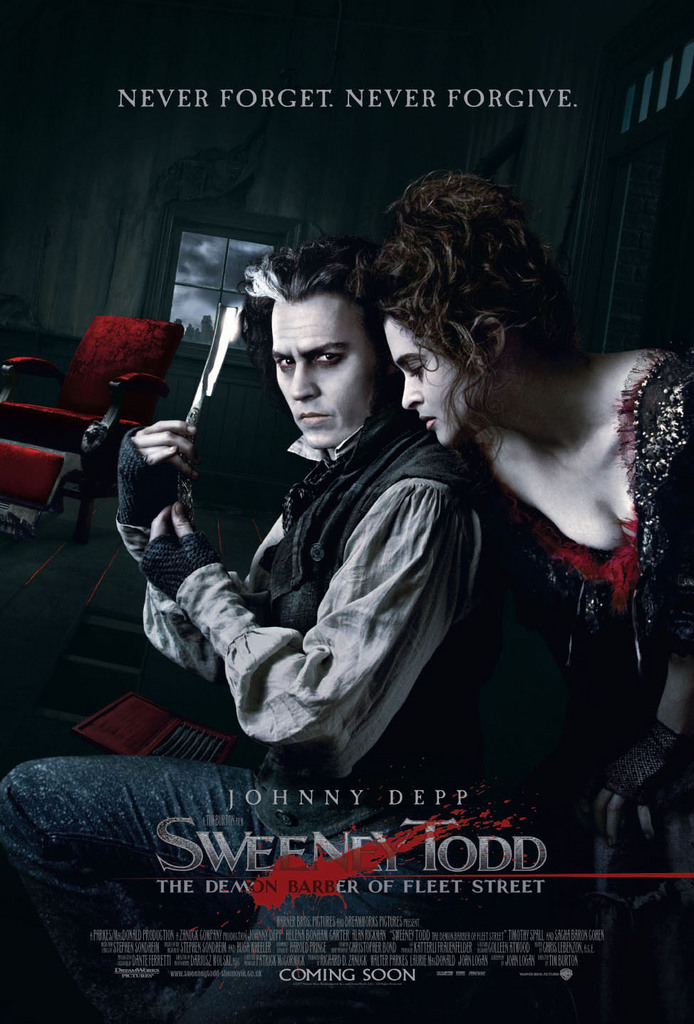 This film holds a special place in my heart. Even though it is not the best film to everyone, it is the best film to me. Other films may accomplish more technically, they may have better pacing or a better plot, etc. But for me, Tim Burton’s Sweeney Todd is everything I’ve always wanted in a film.
Some people are put off of musicals and hate them sight unseen. Me, I like my films loud, dramatic, and over the top. So musicals don’t scare me, although I don’t watch very many of them. The only other one that I love is Moulin Rouge. So I love how strong Sweeney Todd is visually, musically, and dramatically. The visuals are stunning, I love the mixture of real sets with CGI. I also love how the color palette reflects not only different times in Sweeney’s life, but also reflects the characters’ perceptions of their world. Optimistic at first and then pessimistic. I like that the majority of the film is nearly black and white. The cinematographer used the Digital Intermediate process to strip the film of most of its color. This de-saturation really makes the blood pop as well as the pale faces of the cast. The bleakness of Victorian London comes to life and there is no other director who could have accomplished it quite like Tim Burton.

Sweeney Todd is the last great film that both Tim Burton and Johnny Depp have made. I think Sweeney was made at the pinnacle of their careers and they have been on a downward slide ever since. Johnny received an Oscar nomination for his role as Sweeney Todd, thus it’s his last critically acclaimed role. The trio of Burton, Depp, and Helena Bonham Carter has become a bit of a joke these days. But the three have great chemistry together and that comes through in the majority of their work (I’d like to forget Dark Shadows ever happened). The casting of Sweeney Todd and Mrs. Lovett is perfect, I couldn’t imagine anyone else on the roles. Casting younger actors makes the film a little sexier and cooler than the theatrical version. I also think the film really benefits from having non-professional singers in the film (other than Lucy, played by Laura Michelle Kelly). Having actors who don’t normally sing can really hurt a film (ahem, Pierce Brosnan and Mamma Mia!). But in the case of Sweeney Todd, none of the actors sound terrible. In fact some are surprisingly good (Sacha Baron Cohen and that high note, OMG). They also inject their characters personalities into their singing voices better than if they were lip synching to someone else. The characters are more real and relatable because they don’t sound like opera singers.

Johnny Depp is amazing as Sweeney. He owns that role. First of all, I love his look. Collen Atwood, frequent Tim Burton collaborator, designed all the costumes and she does a fabulous job. Some might argue that Depp only has one look and one emotion throughout the film. But I think if you believe that you are missing out on the subtleties of his performance. He is a haunted man who only has one thing on his mind, revenge. The only time he experiences anything close to happiness is when he kills someone. And even then the feeling is only fleeting.
One of my favorite aspects of the film is its dark humor. Sometimes it is very subtle, just a look or twitch from Johnny. Other times it is more overt, such as during the “A Little Priest” number. Helena Bonham Carter is a large source of the humor. Mrs.Lovett lightens the tone of the film with the songs she sings and the way she doesn’t take things too seriously. This is in stark contrast to brooding Sweeney. Helena is a joy and the audience can see how much fun she is having in the role. Of all the parts she has played, this is the one she was born for. The rest of the cast is also quite good, especially Sacha Baron Cohen and Alan Rickman. Alan is appropriately evil. There are a lot of similarities between Judge Turpin and Sweeney. They are both blinded by their own ambitions and disregard those around them. So when Turpin says, “How seldom it is one meets a fellow spirit,” I believe he is quite right, even if Sweeney denies it. Sacha Baron Cohen nearly steals the show as the flamboyant, but calculating Pirelli. As usual, his comedic timing is perfect, but he also excels when he is being serious.

I’ve gone this far without once mentioning that the film is about a cannibalistic barber. I guess when I think about the film that is the least interesting aspect of it. Or I’m just desensitized to it after 30 + viewings. I like the gore because it is done in an artful way. The blood is like paint that Sweeney (and Tim Burton) is using to paint a canvas. I was never grossed out by the film, except for the one shot of a blood skeleton near the end. The film makes the murders both horrifying and funny at the same time. During the song “Johanna reprise” Sweeney is so nonchalant about killing that I giggled once or twice. I also enjoy what the film has to say about revenge and how it affects the person seeking it and everyone around them. I like that the ending is not an optimistic one, but something that people can learn from. The film isn’t afraid to be dark, right up until the end.

I love this movie. I have watched it many, many times. And it never gets old. I think that is due in part to Stephen Sondheim’s amazing songs. The whole thing feels like a long form music video. But the visuals are also incredibly fun and a treat for the eyes. The only criticism I have of the film is that at time the pacing can feel a little slow. Near the middle of the film, when there are less musical numbers, it starts to drag during dialogue only scenes. But during the songs the music, as well as the film and its actors, soars. To me, this is Tim Burton, Johnny Depp, and Helena Bonham Carter’s best film. 9.5/10