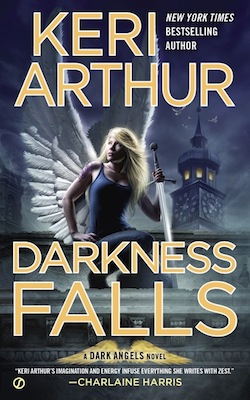 Ok, so this book series is really hard to explain to anyone who hasn’t read any of Keri Arthur’s books, so here’s a synopsis of the first book in the series off of Goodreads:
“Risa Jones is as extraordinary as her heritage. Born from a lab-enhanced clone mother and an Aedh father, she can not only talk to the souls of the dying and the dead, but she can see the reapers and walk the gray fields that divide this world from the next.

They are skills she rarely uses, however, preferring to concentrate on the business she shares with her two best friends.

But when someone wants to rip open the gates that divide hell from earth, Risa is a key component in their plans.

And the only person standing between her and disaster is a reaper who isn’t exactly on her side.”
The Dark Angels series is composed of Urban Fantsay novels, much like Keri’s previous series, the Riley Jenson, Guardian series. The story takes place in Australia and the world is inhabited by all sorts of creatures, including werewolves and vampires. But this is no Twilight. No, it’s more like Fifty Shades of Grey, but without the abuse and with much better writing.
The Riley Jenson series is great, simply amazing. My favorite book series ever. Riley is a strong, very interesting and charismatic character. The action is great, it reads like a movie scene, very engaging and fast paced. And the romance is unpredictable and refreshing.
The Dark Angels series is a spinoff and thus fails in comparison to the original. Risa is not a very interesting character. She is actually very annoying at times. Stuck up and stubborn to the extreme. Her romance with Azriel, a reaper, is the best part of the series. They have a funny relationship that is filled with tension for quite a while. But even they get a little boring once they resolve their issues together.
The action in the series is still quite good. But it gets repetitive very quickly. Risa goes to this place, gets attacked, survives, eats, sleeps, repeat. It’s surprising that Keri was able to drag it out for 7 books. And it goes at a real snail’s pace to. Until the last book in which a lot of issues are dealt with too quickly and neatly. Keri is a talented author though, so the series is entertaining enough, but I nearly gave up on it a few times.
If you want an adult, fantasy series to get lost in I highly recommend Keri Arthur’s Riley Jenson series (starting with Full Moon Rising). But skip Dark Angels as it is just an inferior copy. 6/10