I suppose the simple answer to that question is they don’t make enough money. But it is such a shame when there is so much potential within these shows. I only heard about The Red Road after it was cancelled by its network, the Sundance channel, and it showed up on Netflix.
Initially I was drawn in just by the appeal of watching Jason Momoa (I still miss Khal Drogo). But quickly other aspects of the show grasped me. The Red Road is about many things, but it is essentially about the tenuous alliance between Phillip Kopus (Jason Momoa), a member of a Native American tribe, and Harold Jensen (Martin Henderson), a white police officer that patrols the reservation and neighboring community.

The Red Road tackles two very interesting issues that rarely get covered in mainstream media. First, there is the lives and issues of Native Americans. The characters are all very well formed and never veer into becoming stereotypes. It is also interesting to see the Native community cope with the problem of preserving their own way of life or whether they need to assimilate into Western culture in order to survive.
The show also delves into exploring mental illness, something that I think needs more coverage like this in society. Harold’s wife, Jean (Julianne Nichlolson), suffers from schizophrenia. It is one of the best depictions of mental illness that I have seen. How can Jean and her family cope with this illness that she has hidden for years? Can the stigma of mental illness be erased from society? I wish there was more work like this that could bring attention to these issues in a thoughtful manner.

I also love The Red Road for its great cast and fast paced plot. Each season is only six episodes long, so every moment counts. There were quite a few shocking moments as well as very humorous ones. Jason Momoa is a real star here. I have heard people say that he can’t act; that he can only play Khal Drogo type characters. But here as Phillip Kopus Jason holds the whole show together and displays a wide range of talent. He is menacing, but also caring in his own way. His comedic timing is brilliant and he also uses his physicality extremely well.
I hope that this post may convince some of you to give this show a chance. It is very entertaining and worth your while. It is currently on Netflix (at least here in Canada). The second season ends on a real cliff hanger, so I am hoping that some way the show will be able to return for a third season, maybe through Netflix. And after watching this series I am more excited for the upcoming Aquaman film than ever before. 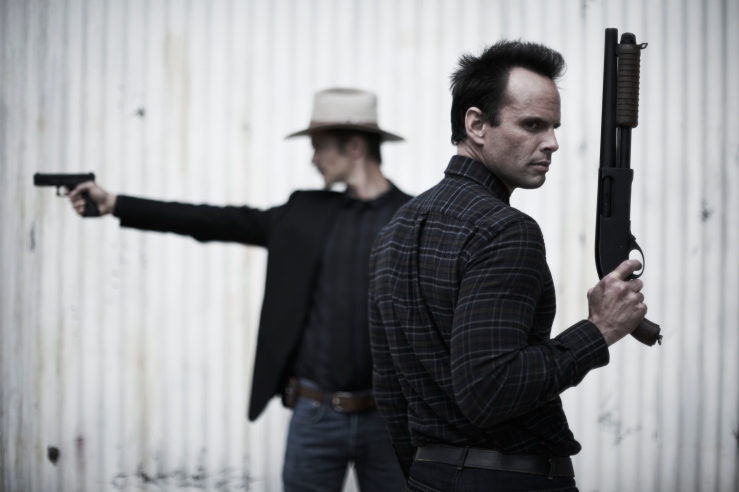 Well, he is one of the most talented actors working today and probably hardly anyone knows his name. Although that is sure to change after the release of Quentin Tarantino’s western, The Hateful Eight.
When you look up Walton Goggins on IMDB the film that first comes up next to his name is Django Unchained. I find that extremely funny because he has quite a small part in that film and he has done much more substantial work. He is one of those character actors that you have probably seen in many works, but you just don’t know his name. His best work is mostly on TV; The Shield, Sons of Anarchy, Justified. But now Walton is (arguably) the star of The Hateful Eight.

In The Hateful Eight, Walton Goggins plays Chris Mannix. Chris has the most lines of any character in the film (and that’s A LOT of lines since it’s a Tarantino movie). Quentin specifically wrote the part for Walton. That’s pretty amazing, especially since Walton isn’t a very high profile actor.
But he deserves to be, and hopefully now he will get the attention he deserves. I recently started watching Justified not too long ago (I’m only on the fourth season still, so no spoilers!). Justified is a very good show that really hits its stride in its third and fourth seasons. The show hinges on the relationship between Raylan Givens (played by the wonderful Timothy Olyphant) and Boyd Crowder (Walton Goggins). It is so interesting to watch these two amazing characters/actors face off against each other. Raylan is a Deputy Marshall and Boyd is a hillbilly criminal mastermind. Often times the two are struggling against each other, but they also have moments when they are allies. Their interactions always feel organic and it is hard to know which character to root for. Walton has this great cadence as he plays Boyd. When Boyd speaks it feels as though the audience is being treated to a piece of poetry. Hard to believe when faced with Boyd’s appearance of wild hair and swastika tattoos. Walton creates so many layers to this character; Boyd is someone to be feared, but he also has a sympathetic heart at times. And he is also very funny. Boyd does terrible things at times, but when he proposes to Eva, his brother’s widow over a stack of drug money, you can’t help but feel your eyes tear up and hope that everything turns out the way Boyd wants it to. There are a million reasons to dislike Boyd, but Walton’s acting instead makes you love him.

When I was watching The Hateful Eight I was so excited when Walton came on the screen. I was so looking forward to hearing his lovely voice a la Boyd Crowder. After all, both Boyd and Chris Mannix are southern boys, so I figured Walton would play them in a similar way. But I was dead wrong. I was disappointed at first because Chris’s voice isn’t as poetic as Boyd’s. But Chris still has some of that same charm. I am amazed actually by how different Boyd and Chris are. The two characters are completely distinct from each other and both are quite amazing. The Hateful Eight is a very good film (not Tarantino’s best, but still good). I found the film lacks energy at times, but whenever the attention shifts to Walton suddenly everything becomes lively again. Chris seems to always be playing everyone else in the room and it makes me wonder whether he actually really was the sheriff.
Walton imbues Chris with all these little nuances and effectively steals every scene he is in. If you didn’t know who Walton Goggins was before, you’ll never forget him after The Hateful Eight.