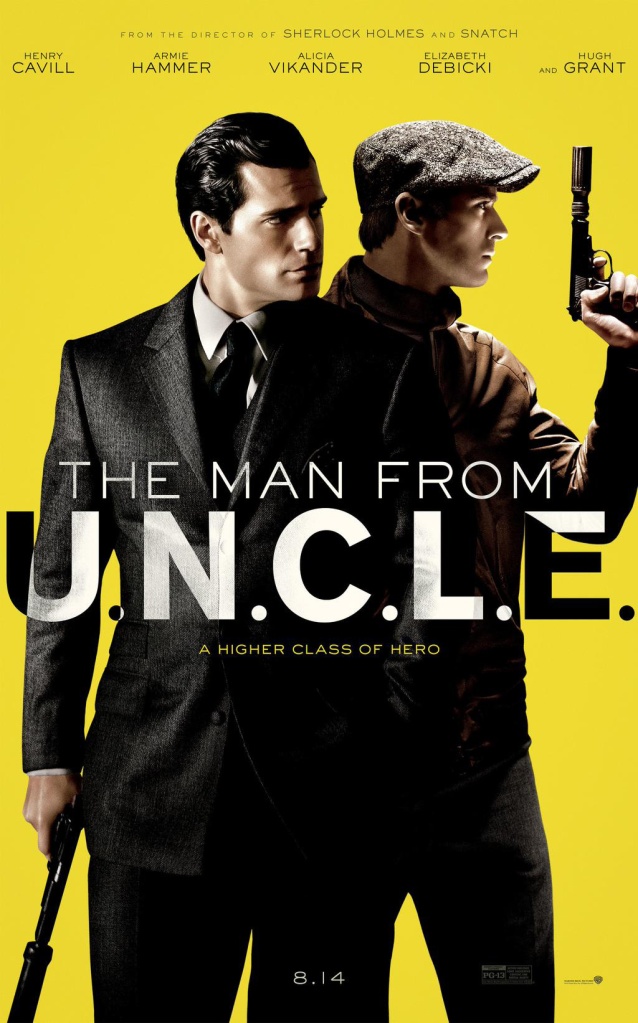 Sorry I’ve been absent from blogging lately, but as we all know, life happens. I haven’t been watching too much lately (other than speeding through some Sopranos which is for a future post), but I did manage to see Guy Ritchie’s film adaptation of The Man from Uncle.
The premise of the film is right up my alley: two cold war spies, one American and one Russian, team up to take on some generic bad guys. The film ended up being fairly average overall. The plot was okay and the film was never boring. But it was also never exciting. I really enjoyed the chemistry between the three leads and that’s why I hope there will be a sequel. Armie Hammer is brilliant even if his Russian accent isn’t always perfect. Henry Cavill looks beautiful and he displays a lot of charisma, something that he wasn’t able to show in Man of Steel. The two men bounce off each other quite well and carry the film. Alicia Vikander is good as per usual, but she is nowhere near as good as she was in Ex Machina. She is serviceable, but other than some scenes with Armie she doesn’t elevate the film at all. The worst part of the movie: the editing. At times it was very bizarre and the flashbacks to five seconds before hand seemed unnecessary. The Man from Uncle gets 6.5/10.

Ray Donovan: Season 3 So Far…
I haven’t been posting about Ray Donovan because it’s been so…dull. Things have picked up a little with the last few episodes. But I recently re-watched season 2. It was a great season because by about the third or fourth episode the stakes felt very high. So everything that happened was exciting and felt vital. Season 3 got to about episode 7 or 8 before it became mildly exciting. The characters all seem to be spinning their wheels. Other than Bunchy and his new bride, Teresa. Bunchy has evolved into a stronger character that I really wasn’t expecting. And I love the way Teresa talks to Ray and stands up for Bunchy. The last episode, “The Octopus,” was touching as Ray gave Bunchy away to Teresa (figuratively, not literally). The episode was also good because there were no Finneys. Katie Holmes, and yes, even the wonderful Ian McShane, have been very disappointing.