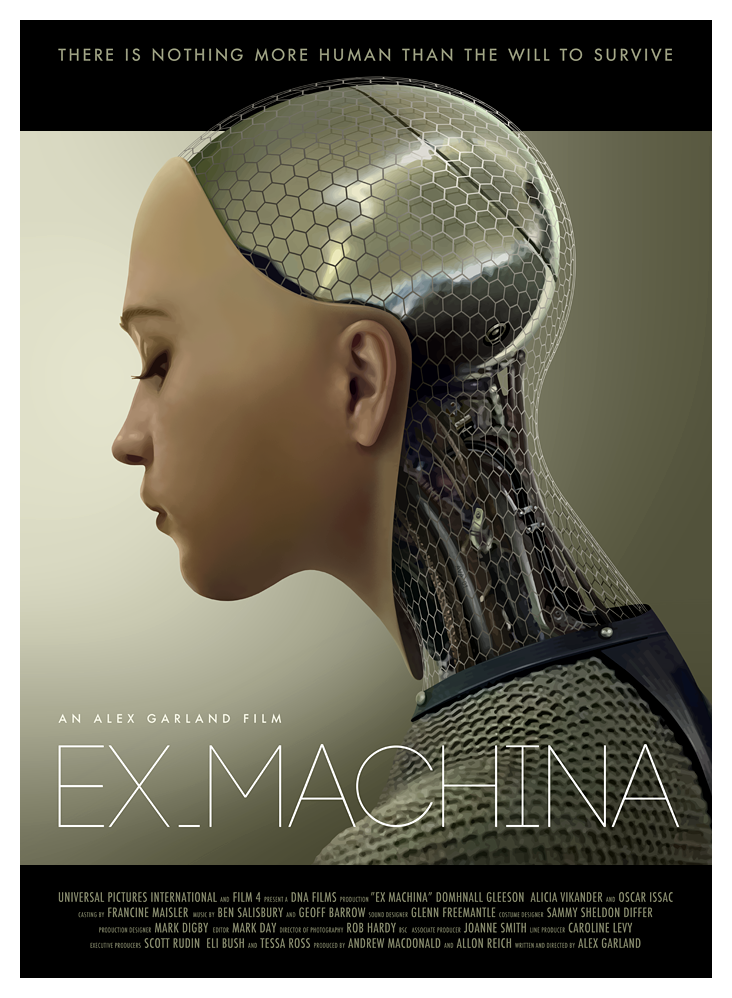 I have been looking forward to this movie for quite some time and it finally came to my city. And it did not disappoint. The film is about a computer programmer (Domhnall Gleeson) who is selected to participate in an experiment evaluating the human qualities of an A.I (Alicia Vikander).

I’m not normally a big fan of sci-fi films (aside from Blade Runner) so I haven’t seen a lot of films about Artificial Intelligence. But luckily no prior knowledge is needed to enjoy this film, one of the great things about it is that it explains some of the science behind A.I. in an interesting way. I came into this film wanting an intellectual experience mixed in with some horror elements. And that’s exactly what I got along with some great, dark humor. The film looks great, the cinematography and the sets are excellent. The CGI on Ava (the A.I.) is quite convincing. The score is one of my favorite aspects of the film. There is a lot of dialogue in this movie, so the score really livens the scenes and adds a lot of tension.

The best part of Ex Machina is the actors. Domhnall Gleeson is perfect as the sweet, intelligent programmer Caleb. Alicia Vikander is wonderful as Ava. She has a really tough job, but she pulls it off quite well. Everything from the way she moves to the way she talks is spot on. But of the three actors Oscar Isaac is my favorite, he steals each scene he is in. He’s hilarious, scary, intelligent and charismatic. He has quickly become one of my favorite actors. After the film I told my boyfriend that Oscar is an actor I would see in anything. My boyfriend was a little perplexed because I’ve only seen Oscar in two films. But he has really impressed me lately.

I highly recommend Ex Machina. It’s a great film, especially if you like your movies more on the talky, intellectual side. It kind of reminds me in a way of a modern Roman Polanski movie, something along the lines of Rosemary’s Baby (one of my favorite films). Ex Machina gets 9/10